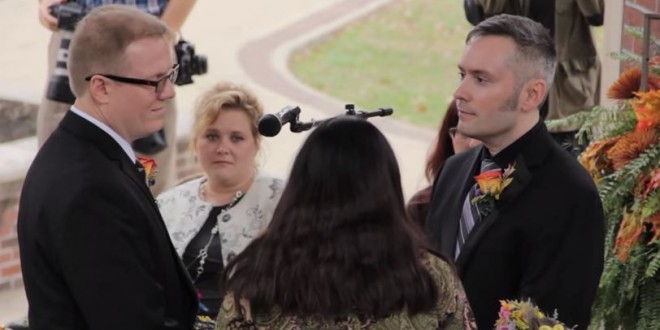 Two months ago, an infuriated David Moore pounded his fist on a counter in the Rowan County Clerk’s office as he pleaded for the right to wed his partner David Ermold. Now “the Davids” are legally bound. Moore and Ermold planned to wed last summer when the U.S. Supreme Court decided same-sex couples deserved the right. But Rowan County Clerk Kim Davis refused to comply with the federal order. In a viral video posted by Moore, more than 1 million people watched Davis tell the couple “no.” On Saturday, Moore and Ermold told one another “yes.” MSU graduate Geraldine Lewis of Elliott County officiated the ceremony, her 7-year-old daughter standing by her side as flower girl. After posing questions to the couple, she announced to the crowd that “the bond is made.” Raindrops sprinkled down from an overcast sky after the couple exchanged rings and kissed.