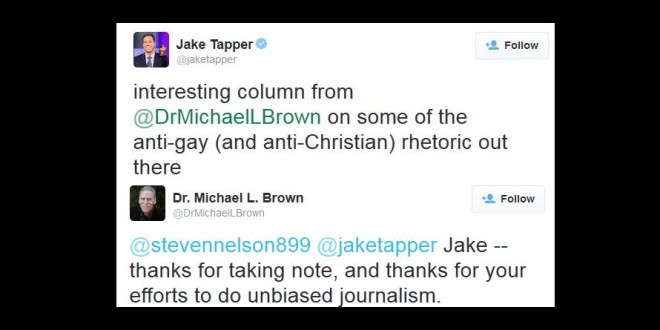 CNN’s Jake Tapper has tweeted out a link to the BarbWire column by anti-gay activist Michael Brown in which Brown claims that the three GOP candidates who attended last week’s “death to gays” convention would never have appeared if they knew in advance about the organizer’s history of calling for the genocide of LGBT Americans. Tapper action is rather curious since he himself asked Ted Cruz about the rantings of Pastor Kevin Swanson on the day before the convention began.

Tapper’s action is doubly ironic since BarbWire is best known here as having published several columns by open advocates of executing homosexuals. Among those BarbWire columnists was Ted Shoebat, who has called repeatedly for executing homosexuals, atheists, and even Christians who support LGBT rights. All of those columns were quietly deleted a few months ago by the site’s owner, Matt Barber, who is a radio host for the Liberty Counsel.

On the plus side, any of Tapper’s followers who followed his link have now been treated to the foul spewings of BarbWire‘s commenters.