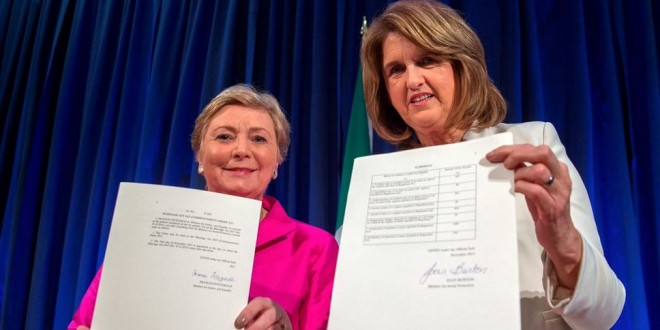 In a brief ceremony Justice Minister Frances Fitzgerald and Tanaiste Joan Burton officially enacted the historic Marriage Act before a crowd of hundreds. The legislation allows for same-sex weddings from Monday, and was made possible after Ireland became the first country in the world earlier this year to vote for same-sex marriage in a referendum. Partners who were wedded abroad will automatically have their marriages recognised in Ireland from midnight on Sunday. George’s Hall in Dublin Castle was set aside for the signing into law ceremony. It was packed with veteran equality campaigners, gay and lesbian couples and well-wishers, as well as politicians keen to be pictured amid the scenes. They all erupted into applause and cheers after the formalities were completed.