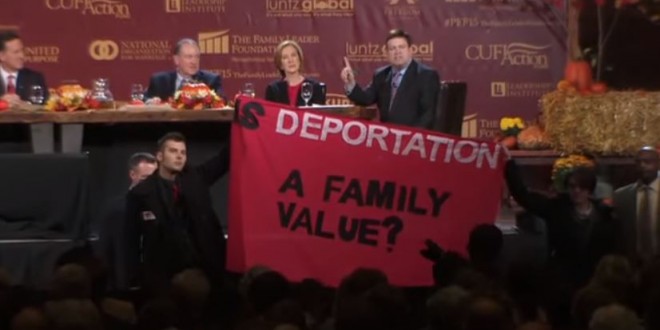 Seven Republican presidential candidates attended the forum in Des Moines. A group calling itself Against All Borders opened up protests by shouting “Deportation is anti-family.” The protest interrupted moderator Frank Luntz just as he was asking the first question of the night, which was directed to U.S. Sen. Ted Cruz. Attendees of Friday night’s forum shouted down the anti-deportation protesters with their own shouts of “U.S.A.” A second group of protesters shouted for animal rights and animal liberation. “You know, I feel like this is being conducted in Berkeley, Calif.,” Luntz said. Security officers escorted each set of protesters out of the forum, bringing them to a room behind closed doors.

Family Leader was a main sponsor of the “death to gays” convention held in Iowa earlier this month. Watch below.