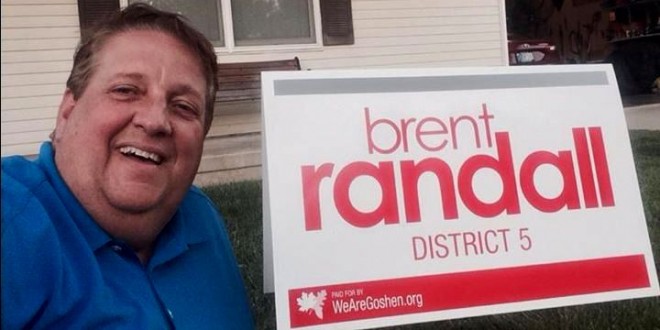 Two weeks ago Goshen, Indiana city council candidate Brent Randall was outed for having a profile on Adam4Adam. Divorced in 2007 after 22 years of marriage to a woman, Randall dismissed the hook-up profile as a “little experiment” and maintained that he continues to oppose a local LGBT rights ordinance, falsely declaring that Indiana already protects its LGBT citizens under state law. Yesterday Randall lost his bid for city council:

Republican Brent Randall couldn’t put up the numbers needed to overcome Democrat Adam Scharf in the traditionally Democrat district. Scharf received 1,075 votes to Randall’s 560 votes. “I was hoping to make a little bit better showing, if only to get Mary (Cripe) more votes down there,” Randall said. “There were times I felt like I was doing the right things and making inroads. But the 5th District is a tough nut to crack.” Both Randall and Scharf were running for office for the first time. “I am very pleased,” Scharf said at the Democratic party site at Ignition Garage. He praised his opponent. “I was worried,” he said. “Mr. Randall is an established person in the community. He has and I am sure will continue to be an exceptional contributor to Goshen.”

Randall, a local sports radio personality, says he is probably done with politics.