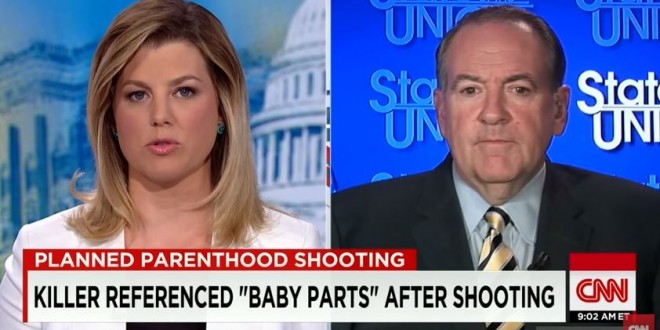 Mike Huckabee: The Anti-Abortion Movement Has No Responsibility For “Domestic Terrorism” [VIDEO]

Mike Huckabee appeared on CNN this morning where he denounced the “domestic terrorism” in Colorado, adding, “I don’t know any pro-life leader, any––if you can tell me one, please correct me––but I don’t know of anybody who has suggested violence toward Planned Parenthood personnel.” Anti-abortion leaders may not condone violence, but Huckabee needs to visit the comments section on just about any right wing site.

Huckabee blames the SPLC for “domestic terrorism” against the Family Research Council because a crazy man saw the FRC listed as a hate group on the SPLC’s site. But OH NO, there’s NO link to THIS instance of “domestic terrorism” according to the man who has literally compared Planned Parenthood to ISIS. Watch below.