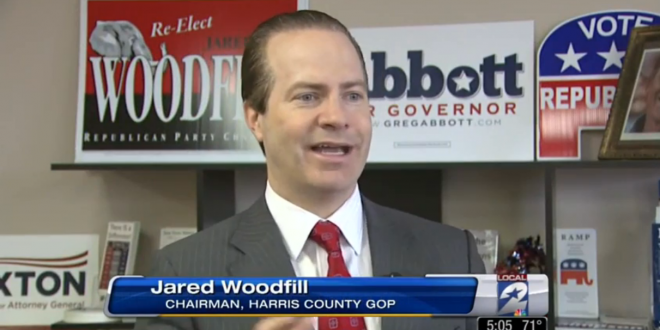 Thank the Lord Almighty Himself that Houston does not allow men in the same bathroom as women! Oh, wait. The Houston Press reports:

Jared Woodfill, the former Harris County Republican Party leader who successfully championed the fight against the Houston Equal Rights Ordinance by proclaiming “no men in women’s restrooms,” is representing a man in court who has admitted to taking photos of women changing clothes without their knowledge—in a bathroom.

Ten years ago, at a pool party at a private home, seven women went into the master bathroom to change into their bathing suits. Following them were three drunk men, including local tech-company owner BJ Farmer, who sat in the shower, took out their cell phones, and began snapping pictures while the women changed. Earlier this year, one of those women, Andrea Villarreal, sued Farmer after his ex-wife found the pictures on his laptop, shortly before their divorce proceedings, and brought them to Villarreal’s attention.

Villarreal is suing Farmer for invasion of privacy, negligence for having never deleted those photos, and defamation, alleging Farmer made false, misogynistic comments about her with fake user names on a Houston Press article about the case last year (tech experts traced online comments calling her a “gold digger” and a “disgusting worm who flashes her breasts to get attention from every guy” back to Farmer’s computer).

Previous TRAILER: The Queen Of Ireland
Next Breitbart Headline Of The Day