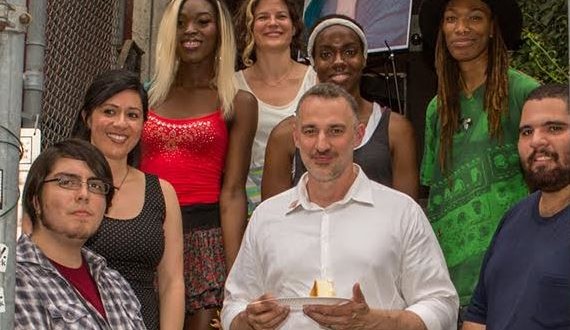 From Joe: Beloved readers, on this Thanksgiving Day, as on every other day of the year, uncountable LGBT kids are living on the streets, turned out by the very people who are supposed to love them. As we do every Thanksgiving, today we turn JMG over to Ali Forney Center founder Carl Siciliano. Please click and read his message below…..

LGBT people have achieved remarkable progress in the last few years. But when I listen to what our homeless LGBT youths tell me about the torture and cruelty the have endured, I feel like they are living in a time before Stonewall. It is still very hard to be an LGBT youth if you cannot find acceptance in your home from the people that are supposed to love you, and you are forced to try to survive in the streets.

A few days ago I spoke with a young transgender man who told me about staying with his Aunt when he was 16. She charged him $200 a week to sleep in a small closet, using a pillow for a bed. And while exploiting his desperation for a place to stay, she refused to recognize his gender identity, which was an ordeal for him.. He told me that he tried to make the best of it, and was happy that at least it was a Tempur-Pedic pillow, and that because he was short, the pillow kept “the most important parts of his body” from being on the floor. When he tried to stay in a youth shelter, the intake worker also refused to respect his gender identity. He was placed in a female dorm, where the other girls refused to allow him to use the bathroom. In fear and frustration he ended up sleeping in the subways.

Last week I met with a young woman who told me about sleeping in the streets. She had tried sleeping in an adult women’s shelter, but the bullying and harassment she suffered was so severe that she felt she would be safer sleeping in the streets. She described her first night spent on a bench in Columbus Circle, were she felt so lost and alone that she cried herself to sleep. What you have to realize about her is that she is tiny; I’d be surprised if she is even five feet tall. She looked hardly older than a child. The two bags in which she carried all her belongings in looked larger than she did. It must have been terrifying to be out alone in the street.

A few months ago I spoke with a young man who told me the most upsetting story of all. He described how, after his father found out his son was gay, he told him again and again that he wished he had never been born. That he was ashamed of having “a faggot” as a son. This young man then confided that he had attempted suicide several times. It is horrible to hear such things; you look into a kid’s eyes and you see how ashamed they are to admit how low they’ve been brought, you see the fear in those eyes.

But we have some great news to share this holiday season. In recent weeks we have been able to significantly expand our housing program, opening three new apartment with 18 additional beds. Now we are able to house 107 youths each night. It is a wonderful thing to be able to give these hurt and abused youths places of refuge and healing. And we have also opened our first housing site dedicated to the special needs of our transgender youths. This is a source of great joy; of all of our youths, our trans kids face the most violence and danger, both in their homes and in the streets. It is wonderful to provide a place where they can feel safe and affirmed. And renovations are under way on a long abandoned building that, when completed, will be the first housing site that we own. In honor of her goodness to our kids, it will be named the Bea Arthur Residence.

This is life at the Ali Forney Center. Lots of pain, and lots of joy. In this holiday season, when so many youths feel hardest the pain of rejection and separation from their families, I thank the JMG community for standing by our youths, through your generosity helping us provide them with homes where they can at last be safe and begin to rebuild their lives. Everyone needs a home, especially our kids. From the bottom of my heart I thank you for your kindness and generosity, which brings safety, warmth and healing to so many.

With love and gratitude, and wishing you a Happy Thanksgiving!

Donations can be made by clicking here.

To learn more about where you donation goes, visit this link.