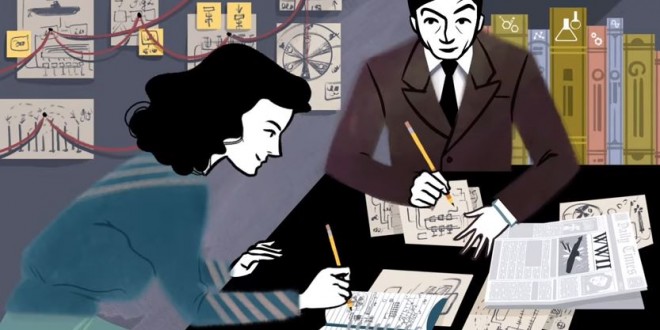 On what would have been her 101st birthday, today’s Google Doodle pays tribute to Hedy Lamarr, who in addition to being a glamorous legend of the silver screen, co-invented the radio encryption system that would become the basis for GPS, Wi-Fi, and Bluetooth. The Huffington Post reports:

Wanting to help thwart the Nazis during World War II, Lamarr (whose first marriage had been to an arms dealer) became interested in creating a secret communications system that could be used to guide torpedoes. “She teamed with composer George Antheil, a neighbor, to create a frequency-hopping system — based on the 88 keys in pianos — that would keep enemies from being able to detect the radio messages,” CNN reported. “They received a patent for their idea, although the limitations of technology at the time prevented it from being implemented until after World War II.” Their system eventually formed the basis for modern wireless communications technology, utilized in cordless phones, cellular phones, satellite communications, Wi-Fi, GPS and Bluetooth. In 2014, Lamarr and Antheil were even inducted into the National Inventors Hall of Fame.

Previous Huckabee: At Least I Never Stabbed Anybody [VIDEO]
Next At The Beard & Mustache Championship [VIDEO]