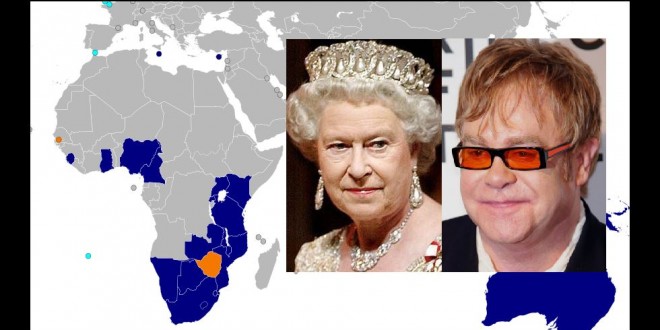 Elton John: Queen Elizabeth Could Undo Anti-Gay African Laws “With A Wave Of Her Hand” [VIDEO]

Today the Elton John AIDS Foundation announced a partnership with the federal government which will increase access to HIV medications in African nations which are historically anti-gay. Speaking to CNBC, Elton claimed that Queen Elizabeth could repeal anti-gay legislation in Commonwealth nations “with one wave of her hand.” CNBC reports:

John added: “These laws come from … the Commonwealth. These laws can be changed very easily by the queen saying, ‘change the law.’ I haven’t approached her about that yet.” When pressed on whether John would approach Queen Elizabeth on the matter, the performer said: “If the worst comes to the worst, one has to, yeah. These are old laws from the British Commonwealth, I mean these can be changed. And so the queen could do that with one wave of her hand.” Uganda, Nigeria, South Africa, and Kenya are members of the Commonwealth group of nations. According to the official website of the British monarchy, although the queen is “not part of the machinery of government in the Commonwealth,” she holds private meetings with the countries’ leaders during the Commonwealth Heads of Government gathering that is held every two years.

Hit the link for much more. The Elton John AIDS Foundation has raised over $300M since its 1992 founding.