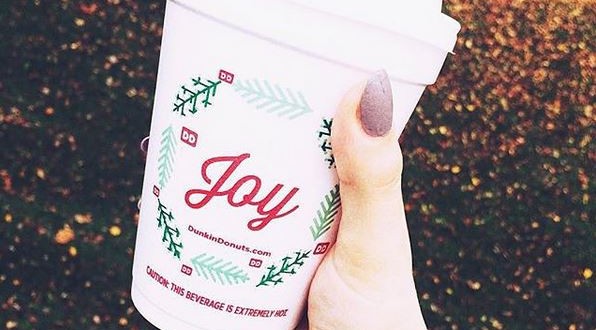 Dunkin’ Donuts unveiled its seasonal coffee cup design for the holidays on Tuesday, giving java drinkers a cup sporting Christmas-themed colors and the word “Joy” in red script. While many praised the release, others thought the coffee brewer’s move was a transparent jab at its competitor, Starbucks, whose own holiday cup this week sparked a polarizing controversy. The social media response from consumers was predictably divided. Those who opposed Starbucks’ seasonal design, which left holiday imagery, most notably Christmas imagery, aside for a simpler look, saw the new Dunkin’ Donuts cups and cried, “Behold, how good and how pleasant it is.” “There’s nothing like waking up and worshiping God with your friends in the morning at Dunkin’ Donuts,” wrote one Twitter user.

“Brands are in a race to attract consumers and earn their business this Christmas. Starbucks and Dunkin’ Donuts are both free to design their cups and express their values as they see fit. By creating cups that specifically message the Joy of the Christmas Season—in sharp contrast to Starbucks’ ‘blank canvas’—Dunkin’ Donuts has specifically welcomed Faith Driven Consumers, and all Americans who love Christmas. The BUYcott is working—do business with brands that embrace and celebrate you, and those businesses will respond. We congratulate Dunkin’ Donuts for their decision and will loudly encourage our community to reward them.”