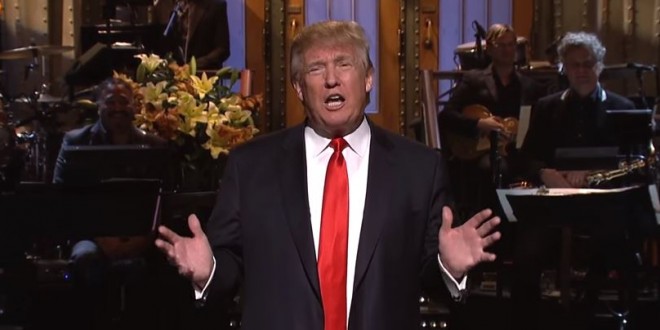 The website DeportRacism.com owes Larry David $5,000. During Donald Trump’s opening monologue on Saturday Night Live, David shouted “Trump’s a racist,” a phrase the political action committee said would net its speaker a cash bounty if spoken during the broadcast. “Trump’s a racist,” David said at the end of Trump’s opening, before adding, “I heard if I yelled that, they’d give me $5,000.” “As a businessman, I can respect that,” Trump said in response. Following the joke, DeportRacism.com praised David for saying the line, and noted that it would pay him the cash reward. “Joke or not, it was true. Go Larry!” the PAC wrote on Twitter.

Trump’s appearance as host of SNL was met with protests from several Latino groups, including The Hispanic Federation, the Labor Council for Latin American Advancement (LCLAA), and the League of United Latin American Citizens (LULAC). Before the broadcast on Saturday night, protestors marched from Trump Tower to 30 Rockefeller Center, home of Saturday Night Live, with more than 577,000 petitions calling for NBC to drop Trump from the show because of his previous comments on Mexican immigrants.