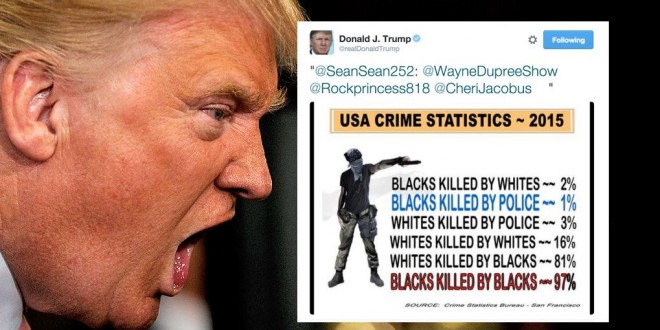 Yesterday afternoon Donald Trump retweeted a racist and false crime graphic that has been making the rounds in Teabagistan for months. Via Gawker:

Perpetual embarrassment Donald Trump can look almost thoughtful next to his rock-solid, occasionally violent base of racist voters. Except, of course, when he doesn’t. Like this afternoon, for instance, when Donald Trump tweeted out a patently false, race-baiting image just one day after his supporters tried to beat the shit out of a Black Lives Matter protestor. There is an astounding number of things wrong here, so let’s break it down.

The data: It’s false. According to the most recently released set of crime statistics from the FBI (which are from 2014), 82 percent of white homicides are committed by other white people, while black offenders account for just 14 percent of white homicides. And out of the total number of black homicides, 7 percent are actually committed by white offenders, while 89 percent are committed by other black people. The Crime Statistics Bureau: It doesn’t exist. Not in San Francisco, where this fake data was supposedly sourced, and not anywhere else in the United States. It sure sounds real, though!