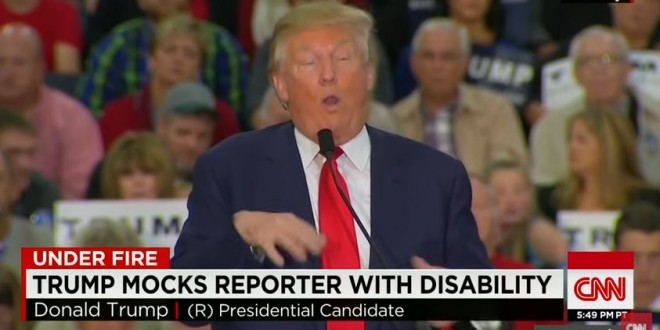 I’d say this is unbelievable but we’re talking about Donald Trump. The Independent reports:

The reality television star and Republican presidential frontrunner Donald Trump stoked controversy yet again this week, when he mocked a journalist with a chronic congenital condition during a campaign rally in South Carolina. The real estate mogul flailed his arms stiffly as he imitated Serge Kovaleski, a New York Times reporter who suffers from arthrogryposis, which limits joint movement.

Mr Kovaleski had provoked The Donald’s ire by disputing his claim to have witnessed “thousands” of Arab-Americans in New Jersey cheering as the World Trade Centre crumbled on 11 September 2001 – a long-discredited conspiracy theory, for which Mr Trump failed to present a scrap of evidence. “The sad part about it is, it didn’t in the slightest bit jar or surprise me that Donald Trump would do something this low-rent, given his track record,” Mr Kovaleski told The Washington Post.

The New York Times is rightfully outraged. Trump just issued a statement in which he claims not to have known about Kovaleski’s disability.