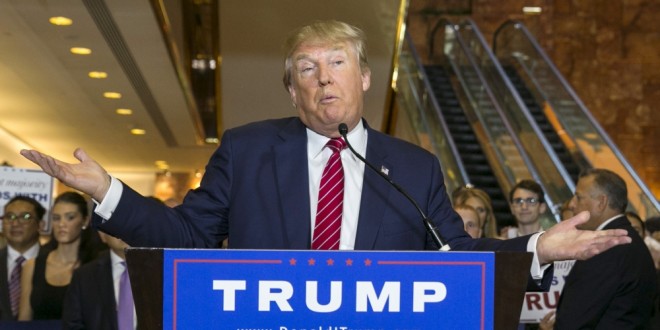 Donald Trump: As President I Might Spy On Muslim-Americans, Make Them Carry Special ID Cards

In a wide-ranging interview published today by Yahoo News, Donald Trump attacked Bernie Sanders as being a “communist” and did the usual bragging about recent polls. But it’s his latest position on Muslim-Americans that is garnering the most attention. From the interview:

After Paris, Trump said “security is going to rule” in the United States, in order to take on what he calls “radical Islamic terrorism.” America has currently agreed to take in 10,000 refugees from the ISIS stronghold in Syria. However, if he is elected, Trump said he would deport any Syrian refugees allowed to enter this country under President Obama.

“They’re going to be gone. They will go back. I’ve said it before, in fact, and everyone hears what I say, including them, believe it or not,” Trump said of the refugees. “But if they’re here, they have to go back, because we cannot take a chance. You look at the migration, it’s young, strong men. We cannot take a chance that the people coming over here are going to be ISIS-affiliated.” Yahoo News asked Trump whether his push for increased surveillance of American Muslims could include warrantless searches.

He suggested he would consider a series of drastic measures. “We’re going to have to do things that we never did before. And some people are going to be upset about it, but I think that now everybody is feeling that security is going to rule,” Trump said. “And certain things will be done that we never thought would happen in this country in terms of information and learning about the enemy. And so we’re going to have to do certain things that were frankly unthinkable a year ago.”

It’s worth pointing out that it was the reporter that brought up the idea of special ID cards. Trump also suggested that former NYPD Commissioner Ray Kelly, who ran a spying operation against NYC mosques, would be given a position in his administration.