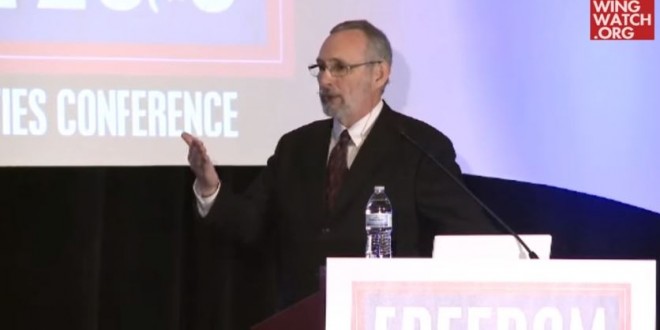 Over the weekend Ted Cruz, Mike Huckabee, and Bobby Jindal spoke at a “religious liberty” convention, where Pastor Kevin Swanson called for executing homosexuals, but only after we’ve been given a chance to repent. Also speaking was Pastor Philip Kayser, who distributed pamphlets calling for the death penalty for homosexuality, witchcraft, and blasphemy. Keyser told the audience that Christians must stand up to the “tyranny” of authorities that defy God by supporting the “abominations” of LGBT rights. Miranda Blue recaps:

Kayser advised his audience that they must pick their battles in this area because “not every act of tyranny is equally heinous.” For instance, he said, it isn’t necessary to defy certain unbiblical tax proposals, but it is absolutely necessary to defy same-sex marriage because it is “destructive to the family”; abortion because it is “murder” and will “inevitably lead to God’s judgment” on the land; and the “sexual sins” found in Leviticus 18 — which includes homosexuality, adultery and having sex with a woman who is menstruating — because “some sexual sins are so heinous that even pagan nations are eventually vomited out of the land for engaging in those sins.” “And if we love our country and we don’t want to see God’s intense wrath falling upon it, we cannot ignore the abominations found in the radical LGBTQ movement,” he warned. “Our Founding Fathers pledged their lives, fortunes and their sacred honor to resist the tyranny of King George and Parliament,” he said. “And I think what we are facing today is a whole lot worse.”

The mainstream media has thus far not reported on GOP candidates attending an event that featured calls to murder millions of LGBT Americans. On Friday, CNN’s Jake Tapper briefly questioned Ted Cruz about his attendance, but Cruz shrugged it off and Tapper did not follow up.

Previous A Little Respect: 30 Years Of Erasure [AUDIO]
Next Huckabee: At Least I Never Stabbed Anybody [VIDEO]