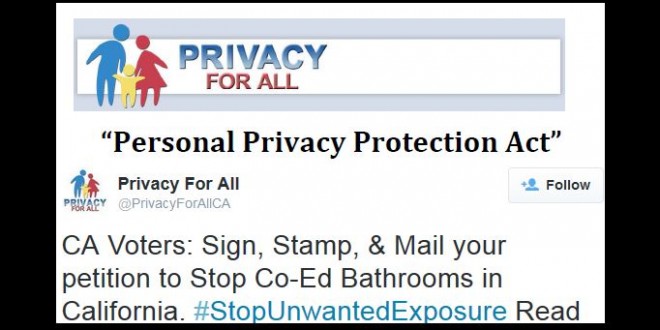 Emboldened by yesterday’s result in Houston, California’s haters today rushed out a press release urging support for their campaign to place a repeal of transgender rights on the 2016 statewide ballot. They write:

The people of Houston have spoken and defeated that City’s proposed bathroom ordinance. But it almost did not happen. The voters were almost denied the right to vote on Proposition 1. With a deceptive name, the elites of Houston tried to push through the Houston Equal Rights Ordinance (HERO) without a vote of the citizens. But Houston residents had a different plan and went to court to place the matter on the ballot. For Houston, the threat of men being able to use the women’s bathroom, locker room and shower has been defeated for now.

Some in California believe citizens of that State should have the same chance to express their support for sex separate bathrooms and their objection to threats to privacy and safety. “This is not a hard issue for most of us,” said Karen England of Privacy For All. “We do not want the unwanted exposure that is a guaranteed component of mixed use bathrooms. Little girls do not want to be viewed by or forced to view physically opposite individuals.”

In 2013, politicians pushed through AB 1266 in California without the support of the public. A referendum challenge to that law resulted in approximately 620,000 signatures demanding a vote on AB 1266. But one in five of those signatures were rejected, many improperly. Just like in Houston, now referendum backers in California are in court in a continuing effort to put the matter before the voters.

But there is also an effort to gather signatures to place the Personal Privacy Protection Act on the 2016 ballot. “We have compassion for individuals that believe that biology has betrayed them,” said England. “But this initiative will assure that public owned bathrooms are separated based on sex, not integrated based on professed identity.” Privacy For All needs to gather approximately 366,000 valid signatures of California voters to place the Personal Privacy Protection Act on the November 2016 ballot. “Houston elites were afraid to let the voters vote, and they had good reason to be. We think California elites have similar reason to be afraid,” said England.

PREVIOUSLY ON JMG: Last year Privacy For All failed in their attempt to force a public vote to repeal a California a law that protect transgender students, but they nearly succeeded in gathering enough petition signatures. Privacy For All leader Karen England has organized public school walkouts over the anti-bullying Day Of Silence. In 2009 England filed a failed federal lawsuit to overturn California’s bill protecting LGBT students from bullying. In 2010 she tried to get then-California Lt. Governor Abel Maldonado to file an appeal of the overturn of Prop 8 while then-Gov. Schwarzenegger was out of the country. She then ran an unsuccessful campaign for Maldonado’s job. In 2011 she launched a campaign to block transgender adults from changing their birth certificates. England was also one of the louder bigots against the repeal of DADT.

Previous Michelangelo Signorile: What Went Wrong In Houston
Next Christian Activist Ted Shoebat: Everyone At “Fag Fest” Chick-Fil-A Should Be Burned At The Stake [VIDEO]