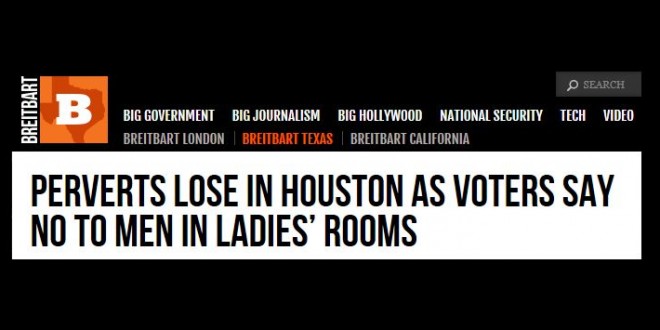 Breitbart Headline Of The Day

“This is a national game changer. Today’s vote is a massive victory for common sense, safety, and religious freedom, not just in Houston, but for all of Texas. The eyes of the nation were on Houston, and the people sent a clear message and soundly rejected this intentionally deceptive and dangerous ordinance. Millions of dollars pouring in from national LGBT extremists, an out-of-control Mayor, and a sustained media onslaught could not overcome the tireless efforts of Houston pastors and people of faith standing for common sense, safety, and liberty. I was born and raised in Houston, and I had faith Houstonians would do the right thing, and they did. This vote will impact the nation and shows, once again, that the people still support common sense Texas values.” – Texas Values head Jonathan Saenz, still stinging over his former wife leaving him for a woman, speaking to Breitbart.