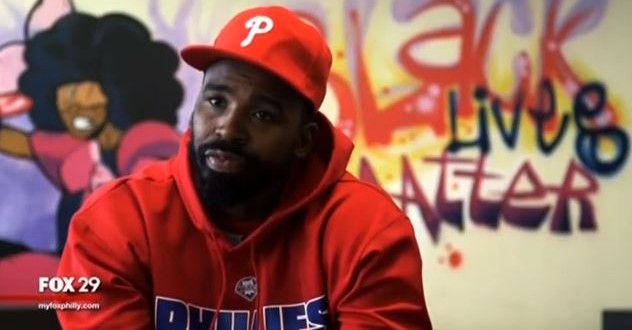 Father of ten Yusaf Mack, 35, who said he was bisexual earlier this week, revealed on Thursday that he’s actually gay and has known for eight years. He confessed on Monday that he was ‘fully conscious’ during the filming of the explicit video, which shows him having sex with two men and in an extensive statement, he apologized for lying about how he came to be involved in the porno. ‘I’m gay. I’m tired of holding it in, it is what it is. I live my life. I’m gay,’ Mack told WTXF. ‘It was all a lie to try to cover myself up.’

Mack said that he’s no longer suicidal, and though he feels free now that he has come out, he is still facing backlash from the video. He and his fiancee have broken up, though they remain friends, he said. He apologized for any pain he caused her and their children, but his oldest daughter did not respond how he had hoped. ‘Kill yourself,’ Mack remembers his daughter saying. ‘You embarrass us.’ The former boxer broke down in tears, telling her ‘you’re right’ before hanging up the phone. It is believed that Mack’s children range in age from three to 21, but Mack told WTXF that his oldest daughters is 23 years old. Mack said that the rest of his children are supporting him.

Previous Dominionist Preacher: God Has Given Donald Trump The Anointing To Run The Government [VIDEO]
Next Bryan Hawn – Hello [VIDEO]