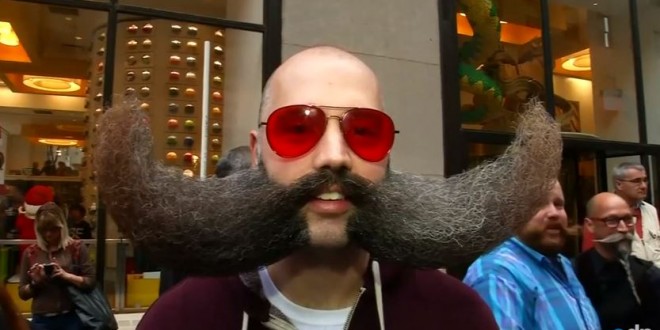 At The Beard & Mustache Championship [VIDEO]

On Saturday night, hundreds of men competed for the title of best facial hair in the nation. Around 300 men paraded on the Kings Theatre stage in Brooklyn, New York to show off their coiffed beards and mustaches for evaluation in categories like Musketeer (a mustache of the long and slender variety, along with a small, pointed beard) and Amish beard (a clean shaven upper lip, combined with an unshaven area that stretches from the chin to the temple)–there were also “freestyle” groups. Scott Metts from Orlando, Florida took home the title as 2015 Just for Men National Beard & Moustache Champion. Ahead of the competition, GQ interviewed Nate “Chops” Johnson, a professional beardsman who has won more than 40 titles in the sport. Facial hair has long been a sign of wisdom and virility. In fact, a 2013 study published in the journal Evolution and Human Behavior found that women considered men with heavy stubble most attractive. Those with heavy beards were held in the highest regard for healthiness and parenting ability.

Many photos of the winners are at the link.