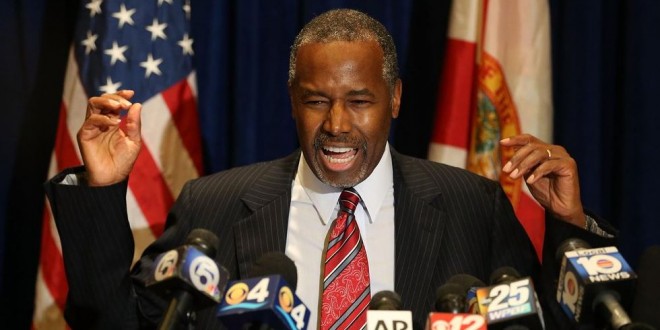 After digging through “obscured” incorporation and property records, the Associated Press today reports that Ben Carson is making up to $2 million annually from real estate deals tied to a felon who has been convicted of health care fraud. Via Talking Points Memo:

Republican presidential contender Ben Carson has maintained a business relationship with a close friend convicted of defrauding insurance companies and testified on his behalf, even as the candidate has called for such crimes to be punished harshly. Pittsburgh dentist Alfonso A. Costa pleaded guilty to a felony count of health care fraud after an FBI probe into his oral surgery practice found he had charged for procedures he never performed, according to court records.

Though the crime carries a potential sentence of up to 10 years in federal prison, Costa was able to avoid prison time after Carson helped petition a federal judge for leniency. That’s different from the position Carson took in 2013 as he prepared to launch his presidential campaign, saying those convicted of health care fraud should go to prison for at least a decade and be forced to forfeit “all of one’s personal possessions.” At Costa’s 2008 sentencing hearing, Carson described the dentist as “one my closest, if not my very closest friend.”

Before his criminal conviction and the revocation of his license to practice dentistry, Costa built a multimillion-dollar fortune through commercial real estate. Investments Carson and his wife made through Costa earn the couple between $200,000 and $2 million a year, according to financial records that Carson was required to file when he declared his candidacy. Costa also continues to promote his involvement with Carson’s charity as part of his real estate business, prominently featuring the logo of the Carson Scholars Fund on the company’s website. His son has worked with Carson’s presidential campaign and a political committee founded by the retired neurosurgeon.

Carson’s campaign has so far declined to comment on the story other than to confirm the business relationship. (Tipped by JMG reader DM)