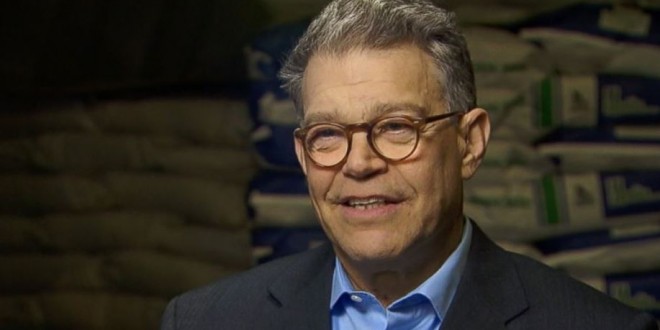 Al Franken: Democrats Can Flip The Senate In 2016

In a rare interview in his Capitol office, the Minnesotan described his most ambitious effort yet to help elect Democrats in his more than six years in Washington. Franken is using his celebrity to help raise hundreds of thousands of dollars for Democratic candidates, and Democrats are relying on him to play an outsize role, alongside high-profile senators like Elizabeth Warren and Cory Booker, to pick up the five seats the party needs to flip the Senate in 2016.

“The Republicans don’t share our basic values about where economic growth comes from,” Franken said. “I have nothing personally against my Republican colleagues other than their views on how the country works.” The task is urgent: If Hillary Clinton becomes president, Franken said, the difference between a Democratic Senate and two more years of Mitch McConnell would be enormous. If Clinton wins, her early legislative agenda, as well as the fate of her Cabinet choices and potentially a Supreme Court nomination, hinges on which party controls the Senate.

Plus, Democrats believe 2016 — with a favorable map and a boost from Clinton’s turnout machine — is probably their only shot to take back the Senate until 2020. In 2018, the Senate election landscape will tilt the other way, putting a slate of moderate Democrats on defense. “It’s absolutely crucial that we take the majority. Because we’re not going to have that chance in ’18,” Franken said.

Hit the link for much more about Franken’s plan.

RELATED: NBC News reports today on the chances for winning back the House.

Republicans hold 247 seats compared to 188 Democratic seats. Democrats need a net gain of 29 seats to win back the majority but their sights are on picking up a substantial number in a general election where the political winds are far more favorable.The most obvious opportunities for Democrats to win are in the districts currently represented by a Republican that President Obama won in his 2012 re-election bid. That number is 25.

The next logical place for possible Democratic pick up is in seats that are evenly split among Republicans and Democrats or lean slightly more Republican. Democrats are often more confident in presidential election cycles because Democratic voters are more likely to vote in presidential years. Since Republicans have such a huge majority, they will inevitably have to play defense. While there are races they can pick up, the majority of their work will be to defend the seats they already have.