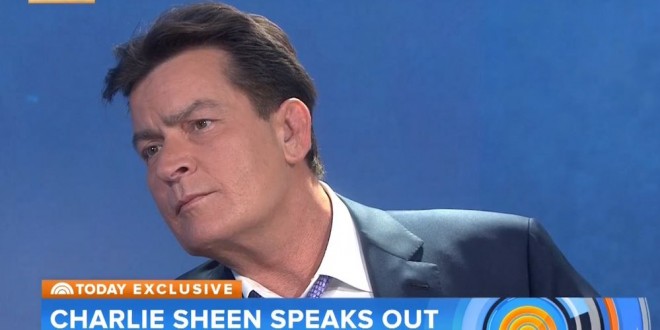 This morning actor Charlie Sheen revealed that he is HIV+ during an appearance on the Today Show.

“I am here to admit that I am in fact HIV positive,” the 50-year-old actor said. “I have to put a stop to this barrage of attacks and sub-truths and very harmful and mercurial stories that are about me that threaten the health of so many others,” he said. “[It] couldn’t be farther from the truth.” Sheen said he was diagnosed roughly four years ago. “It’s a hard three letters to absorb. It’s a turning point in one’s life. The revelation renewed a spotlight on Sheen’s troubled history with drug addiction, pornography and prostitutes.

Sheen said that he had told people that he trusted his status over the past few years, but also bought the silence of others. ‘We’re talking about shakedowns,’ Sheen said of some of the people he had been forced to pay so they kept quiet. When asked if he was still paying anyone for their silence, Sheen said; ‘Not after today I’m not.’ He then said; ‘I think I release myself from this prison today.’ He also said it was ‘impossible’ that he had transmitted the virus to anyone else. ‘I always led with condoms and honesty when it came to my condition,’ said Sheen. Sheen, 50, has spent most of the past year out of the spotlight and has not appeared on television since his show Anger Management went off the air in 2014 save a guest appearance on the ABC comedy The Goldbergs in February.