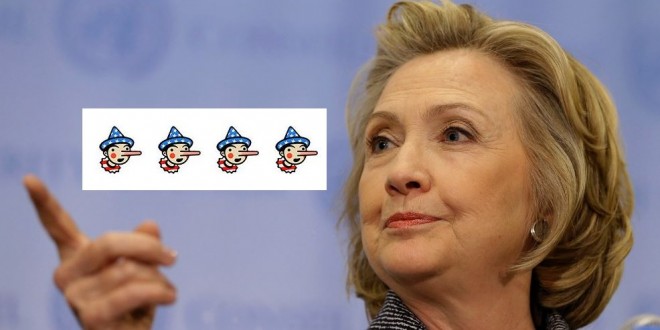 The Washington Post has reluctantly awarded Hillary Clinton its “four Pinocchios” Fact Checker rating for her claims about DOMA. After a lengthy look back into the history of DOMA, they conclude:

This is a difficult claim to fact-check, because Clinton essentially explained what she believed her husband was thinking when he supported DOMA. Clearly, The Fact Checker has no insight into what was in his mind in 1996, nor are we privy to the private conversations he may have had then. We are limited to publicly available information and the recollections of those who were involved in the 1996 DOMA debate. And even then, we did not find clear evidence to support her explanation.

We wavered between Three and Four Pinocchios. Clinton’s answer leans toward Three Pinocchios on the facts surrounding the DOMA debate, because at least two lawmakers we spoke to said such a concern of a constitutional amendment did exist at the time, despite the lack of evidence in congressional records and news coverage.

Where Clinton’s statement becomes problematic is when she says “there was certainly evidence to support” that “there was enough political momentum to amend the Constitution of the United States of America, and that there had to be some way to stop that.” This broader characterization of events frames the political momentum toward a constitutional amendment as so prevalent that DOMA had to be enacted as a defensive measure to stop the bubbling movement. That’s absolutely wrong — and thus tipped us to Four Pinocchios.