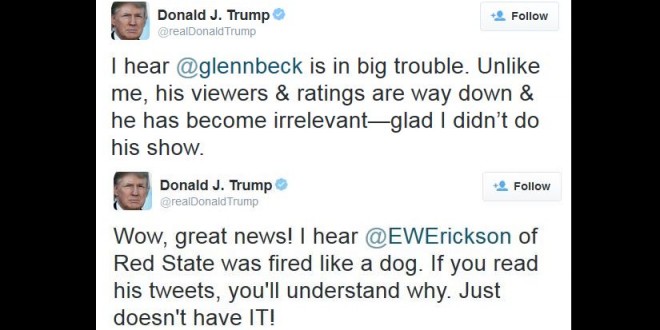 Teabagistan’s months-long civil war has smoldered quietly in recent weeks, but today Donald Trump stoked the embers in the series of tweeted attacks on Glenn Beck and Erick Erickson, the latter of whom famously disinvited Trump to a right-wing convention over Trump’s “blood coming out of her whatever” crack about Megyn Kelly. For his part, Erickson says that he hasn’t been fired and that he left Red State because its owner, Salem Communications, competes with the radio network Erickson currently works for. Teabagistan’s civil war has pitted far-right sites like Breitbart and World Net Daily against Fox News and relatively moderate right wing sites.