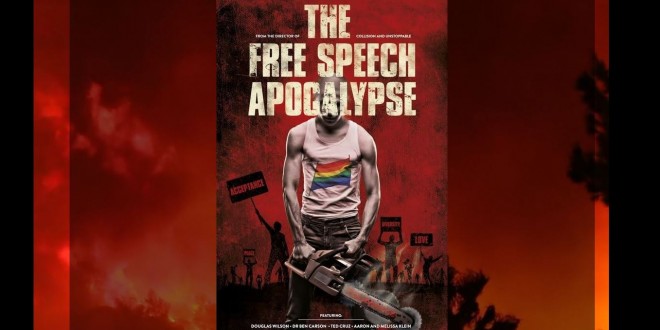 Ted Cruz and the Oregon bakers appear in yet another anti-gay documentary about how them rotten gays are metaphorically tying down Christians and duct-taping their mouths. This one is from the guy who produced Kirk Cameron’s 2013 movie, Unstoppable. Via press release:

Called America’s most hated preacher, Pastor and theologian Douglas Wilson of Christ Church (Moscow ID) was invited to Indiana University in 2012 to deliver a series of lectures on traditional marriage and family. Wilson was warned about possible protests and potential violence over his “dissenting” opinion but stood behind the lectern anyway. Wait until you see the hate and vitriol unleashed on him by the audience. The Free Speech Apocalypse documents the intensity that ensued on April 13, 2012, when a group of Midwest college students decided that Wilson’s traditional views are now to be considered “hate speech” and that hurling insults, profanity, and disrupting his attempt to rationally present his views was acceptable.

“It’s not the first time I’ve faced the tolerance buzzsaw,” said Wilson. The Free Speech Apocalypse exposes the strategies of the anti-God, anti-traditional, hyper-liberal elite and offers perspective on the cultural decay that has accelerated across the country over the three years since Wilson’s visit to Indiana University. Worst yet, The Free Speech Apocalypse demonstrates clearly the erosion of free speech and religious liberty in America. The right to hold your own opinions if they differ from leftist agendas is vanishing at an alarming rate, and it’s time for ordinary Americans to wake up and speak out.

NOTE: The full title on the trailer is Stonewall: The Coming Free Speech Apocalypse, which is different from the title at the film’s website.