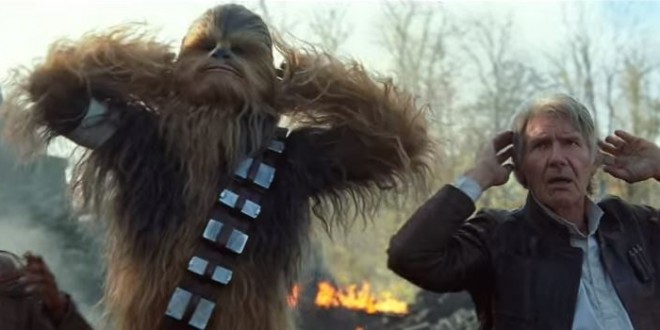 The new footage opens with Daisy Ridley’s Rey as she scavenges what looks like an old starship — likely the Imperial Star Destroyer seen in the first trailer — before moving on to John Boyega’s Finn as he questions his place in the galaxy. Another shot reveals Adam Driver’s Kylo Ren ominously promising to finish what Darth Vader started. While the trailer is heavy on action and sweeping shots of the Millennium Falcon, it still plays coy with the stars of the original trilogy — Harrison Ford’s Han Solo and Peter Mayhew’s Chewbacca get the most screen time of the returning actors, with only a brief glimpse of Carrie Fisher’s Leia and no full shot of Mark Hamill’s Luke, who is implied to be the cloaked figure seen with R2-D2 in the trailer.

Advance sales for the December 18th opening also launched tonight and Variety notes that major sellers including Fandango buckled under the onslaught. I didn’t bother with the second Star Wars trilogy and have never even watched any of them on television. But this trailer is already taking me back to the summer of 1977, when 17 year-old me spent about a dozen consecutive Saturdays watching the first Star Wars at a suburban mall theater in Orlando. Maybe it’s the theme music.
RELATED: Also released today was the official poster.