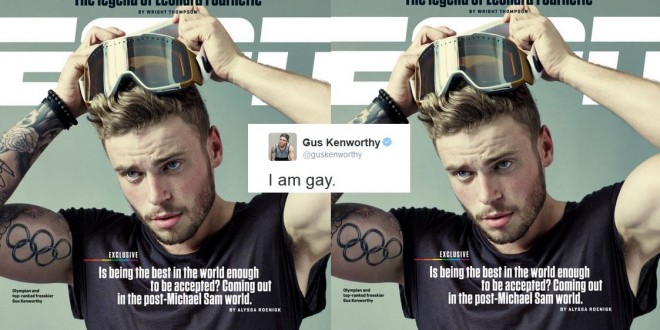 Gus Kenworthy started coming out to his family and closest friends nearly two years ago. His mom said she knew. His brother said he was proud. His best friend  voiced unrelenting support. And if Gus Kenworthy were an average 24-year-old, the announcement — the story — might have ended there. But Gus Kenworthy is not an average 24-year-old. He is the top freeskier on the planet, an Olympic medalist, a face of the X Games. He is an elite athlete competing in the world of action sports, where sponsors — and income — are inextricably linked to image. In other words, he is an athlete with a lot to lose. But Gus Kenworthy is ready to tell that world, his sport, his truth. And so, as we sit down together in Los Angeles in September, he begins the only way he knows how: “I guess I should start by saying, ‘I’m gay.'”

Hit the link for much more. Also from the Associated Press:

In the 20 months since his trip to Russia, where debate raged over gay rights and the government’s law against gay “propaganda,” Kenworthy has become more assured about who he is, both on and off the slopes. He has won a title on the Dew Tour, more World Cup podiums and had a legitimate chance at the overall championship last season until a leg and knee injury ended things early. Relegated to the gym for months of rehab, he finally had the time to crystalize his feelings about whether he was ready to tell the world who he really is. He said he likes the idea of coming out while he’s at the top of his game, while people in his sport – especially kids – are paying attention. “We admire Gus for having the strength to tell the world who he is as a person, and paving the way for others to do the same,” said Tiger Shaw, the CEO of U.S. Ski and Snowboard Association.