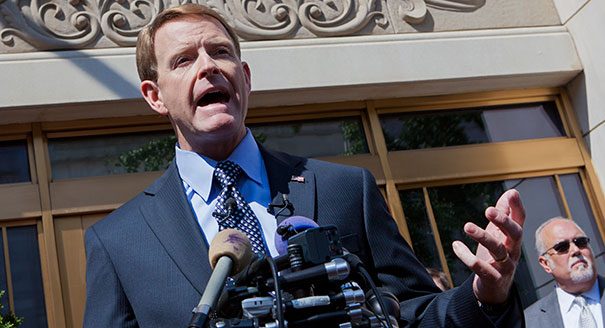 Tony Perkins is very unhappy that the rest of the world is finally learning that the Liberty Counsel is a hate group. Via press release:

“The left-wing media is piling on with attacks on the Davis’s attorneys at Liberty Counsel. In what can only be called irresponsible reporting, the AP’s Claire Galofaro tried to discredit Mat Staver’s organization by slapping the anti-Christian Southern Poverty Law Center’s (SPLC) reckless “hate” label on the group. Of course, the only thing worse than trying to smear Liberty Counsel is using a thoroughly discredited organization to do it. The SPLC, as most conservatives know, was linked in federal court to the first case of domestic terrorism in Washington, D.C.

“After inspiring the shooting at FRC, most Americans started to rethink the credibility of the so-called “civil rights” group. When the SPLC’s bullying tactics were exposed, the FBI went so far as to remove links to the SPLC from its “hate crimes resource” page. The U.S. Army was next, distancing itself from the group’s materials. Now, despite the SPLC’s agenda of intimidation, the media is using the organization to bludgeon Liberty Counsel and Kim Davis. But instead of exposing any wrongdoing on their part, the media is only exposing its own hostility toward Christians. Which sadly, only furthers the extremism that’s silencing religious freedom in the first place.”

Since we’re talking about links to terrorism, it’s worth noting one more time that Charleston mass murderer Dylan Roof was a fan of the same white supremacist group once addressed by Tony Perkins.