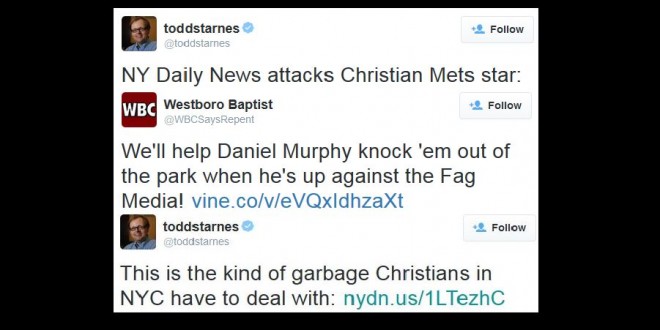 Earlier this year Murphy got very upset when Major League Baseball Ambassador for Inclusion Billy Bean visited the Mets clubhouse, with Murphy telling the press that he “disagrees with the lifestyle, 100%.” The op-ed was penned by gay Mets fan Joe Dziemianowicz, who writes:

Everybody’s calling him a hero. I say zero. Note to Daniel Murphy: don’t hate me because I want to get to first base with Matt Harvey. So while the entire city has come down with a raging case of Mets fever, I’m just raging. Don’t get me wrong, I’d love to catch this bug whole-hog and jump on the big blue-and-orange bandwagon. This baseball stuff — especially the Mets’ playoff run — is great immersive theater. Fans wearing wacky wigs inspired by Jacob deGrom and Noah Syndergaard, the Samson-tressed pitchers? Yes, please. Grown men and women in team jerseys and facepaint on the subway? Love it. Normally, I’d say I’m in. But because I’m out, I can’t. Yep, it’s a gay thing. Murphy is famously homophobic — and that doesn’t play in a major league town where the pennant is rainbow-colored.

Following a media furor about Murphy’s comments, he declared that he will no longer discuss his religious beliefs with the press. Murphy went on to have a stellar season and broke a major league home run record during the playoffs. Hit the link for the rest of the op-ed.