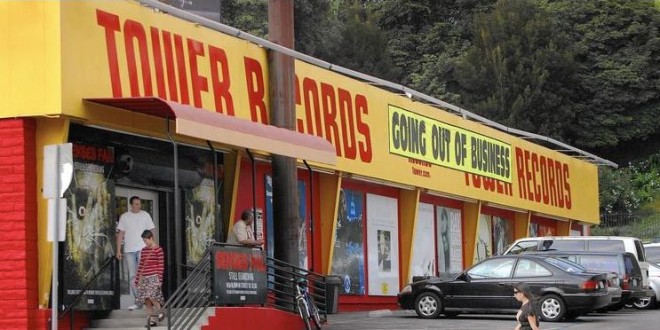 The Life And Death Of Tower Records [AUDIO]

NPR has interviewed actor Colin Hanks (son of Tom Hanks) about his new documentary about Tower Records. An excerpt:

“Tower sort of helped pave the way for your identity,” Hanks says. “For lack of a better phrase, music makes people, sometimes, where you sort of latch on to music as a way of identifying yourself or your tribe. I got that at Tower Records.” In Hanks’ documentary, you see founder Russ Solomon and his innermost circle — many of whom were there when Tower was founded in California — having a ball building this thing together. Everyone, from clerks to customers, could feel those good vibrations. During its flush years, Tower was a pilgrimage place for music fanatics — even for the world’s biggest stars. Elton John talked to Hanks about how he’d go into one of the Los Angeles stores every week to buy stacks of new releases. “Tuesday mornings, I would be at Tower Records,” John says in the film. “And it was a ritual, and it was a ritual I loved. I mean, Tower Records had everything. Those people knew their stuff. They were really on their ball. I mean, they just weren’t employees that happened to work at a music store. They were devotees of music.”

RELATED: In a way, this here website thingy kinda-sorta exists because of Tower Records as I was the northern California rep to Tower for DNA (Distribution North America) – a division of the Sacramento-based music distribution behemoth Valley Media, which famously crashed and burned in the dot-com/Napster bust. I repped 200+ indie labels to Tower and others (Amoeba, Virgin, Rasputin), but when that job ended I took the gig with the publishers that then ran Pride Magazine and moved to New York City. As Hanks notes in the above-linked story, the buyers at Tower were incredibly knowledgeable in each of their genres and had great autonomy in their purchasing decisions. And they treated me wonderfully. RIP Tower.