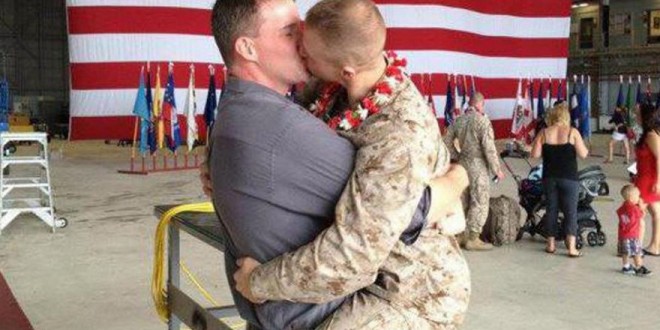 NOTE: An important correction is below.

The US Marine whose welcome home kiss from his boyfriend rocketed around the world in 2012 has gotten married. Gay Star News reports:

The couple whose photo quickly became a symbol of the post-Don’t Ask, Don’t Tell era in the US got married last weekend in Honeoye Falls, New York. Back in February 2012, Marine Sergeant Brandon Morgan returned from a six-month tour of duty in Afghanistan. He jumped into the arms of his strapping boyfriend Dalan Wells at Marine Corps Base Hawaii. Their homecoming kiss was captured by their friend, Dave Lewis, who later posted it on a Facebook page titled Gay Marines. Morgan popped the question to Wells in 2013, just a year after a picture of their romantic reunion took social media by storm. They have been together since 2008.

IMPORTANT CORRECTION: JMG reader Kyle writes to point out that the above-linked story is incorrect. Sgt. Morgan and Mr. Wells actually go married this week two years ago and Kyle was in the wedding party. It’s not clear why Gay Star News, which is usually quite reliable, is reporting that the wedding just happened. I’m going to leave this post up nevertheless because it’s still a sweet story and because you can all go look at Kyle’s photos from the 2013 wedding. Kyle adds that Sgt. Morgan has just re-upped with the USMC.

Previous NORTHERN IRELAND: Challenge To Same-Sex Marriage Ban To Be Heard In December
Next SUNDAY: National Coming Out Day