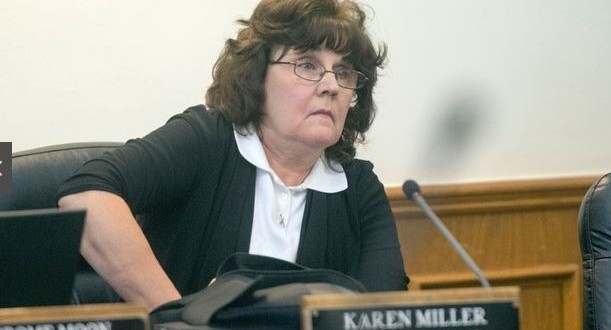 TENNESSEE: Resolution Asking God Not To Kill Everybody Over Gay Marriage Will “Most Likely” Return

As those of us who watched the live-stream know, last night’s county commission meeting in Blount County, Tennessee was abruptly adjourned without a vote on the resolution that would ask God to pass over Blount County when he kills everybody for loving gay marriage. The resolution’s author, Commissioner Karen Miller, says she was “blindsided” by the move. The adjournment brought howls of protest from the many red-shirted LGBT activists in the chamber. The Knoxville News-Sentinel reports:

“I’m still unsure what that was,” said Gwen Schablik, area committee chair for the Tennessee Equality Project, which was represented by dozens of protesters dressed in red among the crowd. “Obviously the fact that it was dropped, that they completely closed the meeting off, is definitely a victory.” “But for now, we’re definitely organizing and continuing and watching, watching to see what they do. And we’re not going to give up.” The resolution, in part, had asked that God “pass us by in His Coming Wrath and not destroy our County as He did Sodom and Gomorrah and the neighboring cities. As the Passover Lamb was a means of salvation to the ancient Children of Israel, so we stand upon the safety of the Lamb of God to save us.” The resolution’s sponsor, Commissioner Karen Miller, said she was blindsided by the vote, but will “most likely” attempt to resubmit it for a future meeting. “I’ve never experienced this before, for a meeting to be adjourned before it even started,” Miller said. “It’s not fair to the citizens. They’ve come all this way to speak and they should be allowed to speak. … I think it’s very unjust.”

Miller says she will “most likely” reintroduce the resolution at a future meeting.

VIDEO: The guys at Red State Update have weighed in.