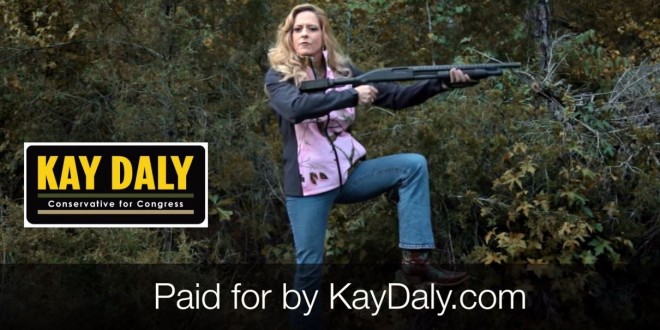 Teabagger US House Candidate Fires Shotgun, Says She Is Hunting RINOs For Being Pro-Gay Feminists

In her just-issued campaign clip, former North Carolina Republican Party spokeswoman Kay Daly fires a shotgun and says she is hunting a RINO in the US House for being an immigrant-loving, pro-gay feminist. That RINO is Rep. Renee Elmers (R-NC) – who is a piece of fucking work herself. From the Raleigh News & Observer:

The narrator in the ad ratlles off a litany of complaints about Ellmers. “This feminist voted to cut veterans benefits and to gut the military budget,” he says. “She voted to let homosexuals pretend they’re married. She’s a RINO who voted for Obamacare and voted to raise the debt ceiling twice to pay for abortions in D.C. and to fund ‘Planned Butcherhood.’” But it’s Daly’s appearance at the end of the ad that sets her campaign apart. The candidate shoots a gun and offers an invitation to viewers: “I’m hunting RINOs (Republicans In Name Only). Care to join me?”

Previous Liberty Counsel: We Are Totally Not A Hate Group
Next White House: Not Ready To Endorse Equality Act
UPDATE: Video Added To Post