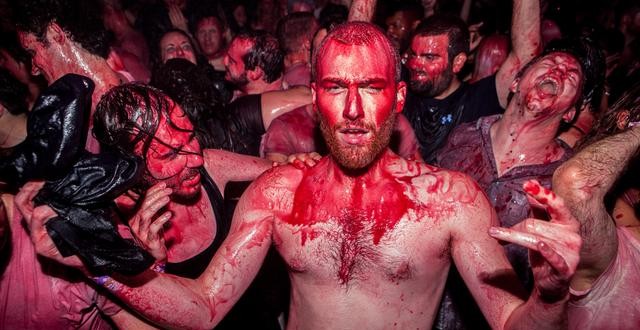 So There Was A “Blood Rave” In New York City

Remember that opening scene in Blade when all the vampires are at a rave and the sprinklers douse everybody with blood? Yeah, there was a recreation at Terminal 5 in Manhattan this weekend.  Because Comic Con of course. Gothamist reports:

Put on by BBQ Films and tied to the weekend-long ruckus that is NYC Comic Con, the Blood Rave featured a live action performance of scenes from the film, with ticket-buyers encouraged to dress the part of hemoglobin-craving vampires. Also adding to the ambiance was electronic music legends The Crystal Method, who headlined the evening. But the star attractions were Blade… and all the (fake) blood. Just before midnight, a squadron of technicians suited up with body-mounted sprayers surrounded the crowd and, on cue, soaked the writhing masses with synthetic blood. No leather corset or bare tattooed back was spared as the ravers seethed with fanged glee beneath the crimson rain. For a few hours, it was truly weird and wonderful to see a sea of giddy daywalkers living out fantasy bloodlust.

Tons of photos are at the link.