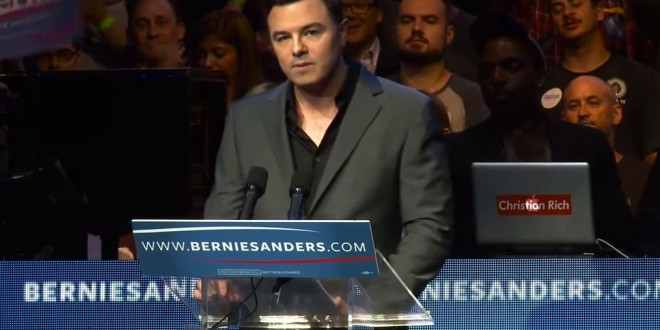 Celebrity endorsements for Bernie Sanders have been relatively sparse, but last night Seth MacFarlane effusively praised Sanders in an opening speech to a rally in Los Angeles. Variety recaps:

MacFarlane said that he was particularly impressed by a response that Sanders gave at Tuesday night’s debate. Asked what was the country’s greatest national security threat, Sanders answered climate change. “Senator Sanders was the only candidate on that stage who gave the correct answer: climate change. Of all our biggest challenges, social inequality, healthcare, this one is the one that must go immediately to the front of the line. This is the only one with a non-negotiable timetable.” “While it would be way funnier if Trump won, it would be far better for the health of the country if Bernie Sanders was the next president,” MacFarlane said. MacFarlane also noted that while Republicans have been great about demonizing the term “socialist,” it was Franklin Roosevelt and the New Deal that reined in some of the excesses of capitalism. Interspersing his remarks with quips, including one about Bill Cosby, he also said that Sanders “has removed my trepidation from saying aloud that capitalism and Democratic socialism, that not-so-scary word, can and should coexist.”