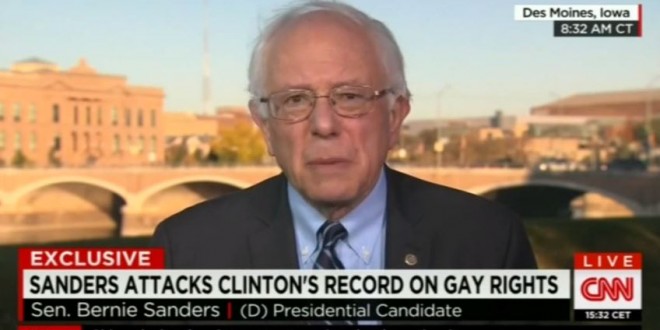 On Thursday, Hillary Clinton told Rachel Maddow that her husband’s signing of the DOMA bill was a “defensive action” meant to ward off a constitutional amendment banning same-sex marriage. Bernie Sanders isn’t having it. Via The Hill:

“To my mind, I think the evidence is very, very clear that that legislation was anti-gay legislation, it was playing off the fears of a lot of Americans,” Sanders said on CNN’s “State of the Union” on Sunday. DOMA made the federal definition of marriage the union between one man and one woman and allowed traditional-marriage states to refuse to recognize gay marriages performed in other states. “What they were trying to do is make it impossible for gay couples to be married, to get benefits from the federal government, to have marriage in one state be accepted and recognized in another state,” he said. “I think everybody at the time knew that this was homophobic legislation.” “We have come a long way since that vote in 1996,” he added.