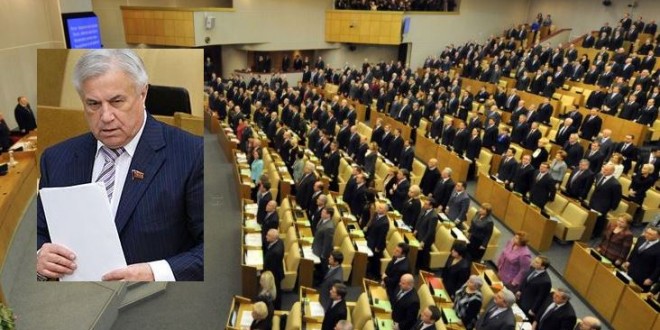 Two Communist Party members of the DUMA have introduced a bill that would criminalize coming out. A note attached to the bill declares that gays were once executed in ancient Greece, so (presumably) they should just be glad that breaking the proposed law would only result in jail time. RT.com reports:

Ivan Nikitchuk [inset] and Nikolay Arefyev want to amend the Russian Administrative Code with a new article listing “public expression of non-traditional sexual relations” as a violation. An explanatory note attached to the draft reads that if this expression takes the form of “demonstration of one’s distorted sexual preferences in public places,” it must be punished with fines between 4,000 and 5,000 rubles ($64-$80 at current rate). And those who do this in educational and cultural establishments or offices of state and municipal authorities can face up to 15 days of arrest.

“I think that the problem is acute and urgent because it concerns the social diseases of our society and the moral upbringing of the younger generation. Unfortunately, the mechanism suggested in the 2013 law ‘On the protection of children against the information that harms their health and development’ has proved to be ineffective and this prompted us to develop new measures,” Nikitchuk said in comments with Izvestia daily.

The two MPs stated that their bill is based on historical experience, both of the Soviet Union – when male homosexuality was a criminal offence punishable by prison sentences of between five and eight years – and “ancient times” when the anti-gay laws were much more severe. “In Athens during the classical period homosexuals had to report their vice to the people’s assembly and got stripped of their civil rights. Those who tried to conceal it were either exiled or executed. The laws of Ancient Sparta were even stricter – there were no reports, anyone who got caught was executed,” read the explanations attached to the bill.