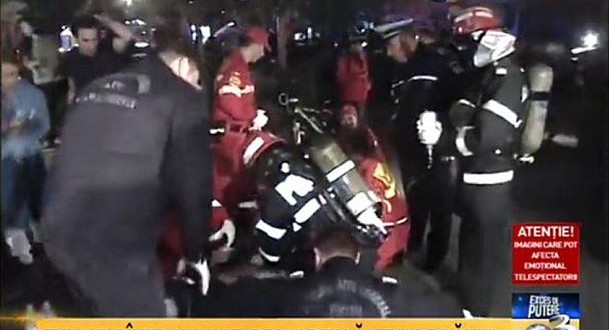 In an incident that echoes the gruesome Rhode Island nightclub fire of 2003, dozens of concert attendees in Bucharest, Romania were killed tonight in a nightclub fire that may been sparked by a metal band’s pyrotechnics. The Express reports:

At least 25 people have been killed and 88 wounded in the blast – thought to have been triggered by fireworks. A fire broke out after the pyrotechnics were used inside the Colectiv club in Bucharest, Romania, local media reported. It is thought that as many as 400 people were in the venue – where a local rock band were performing – when the explosion occurred. Some of the victims are said to be foreigners but their nationalities have not been confirmed. Reporter Dana Carbunaru said: “Apparently there were several hundred people in the club at the time of the explosion. “It seems that someone had [been] given fireworks at a time, the fireworks have reached the ceiling and wiring had exploded.” Gabriel Oprea, Romania’s interior minister, said: “Unfortunately, the number of deaths is expected to rise.” The event featured a “customised light show and pyrotechnic effects”, according to a Facebook event page set up by the club.

The Rhode Island fire, which killed 100, was sparked by pyrotechnics set off by the crew of the heavy metal band Great White. The advertised band in Bucharest tonight was Goodbye To Gravity.

Previous Anthony Bourdain: Every Restaurant In America Would Shut Down Under Trump’s Deportation Plan
Next Tony Perkins: Houston Wants To Punish Christians For Refusing To Celebrate Homosexuality