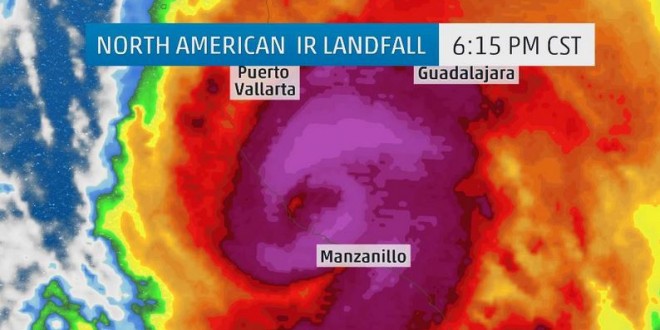 Puerto Vallarta, Mexico has escaped Hurricane Patricia. After a day of hotel evacuations, airport closures, flight cancellations and pending power interruptions the worst is over for Puerto Vallarta residents as of 11 pm CST. However, the damage will be severe south where Patricia made landfall near Cuixmala, Mexico at approximately 6:15 CST with 165 mph winds as a Category 5 storm. Keep thoughts and prayers for those residents south during the night and for days to come. We experienced some light rain and clouds but nothing else during the day Friday. There was no wind, no storm surge or any reports of damage in the city. Most of Puerto Vallarta’s businesses were closed on Friday, and those that opened closed by late afternoon.

From the Weather Channel:

Previous New York City In The 1890s [VIDEO]
Next RUSSIA: Proposed Law Would Criminalize Coming Out