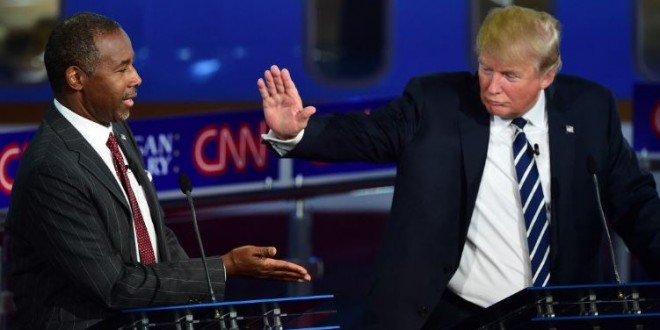 We’ll enjoy seeing The Donald spin suddenly being behind by eight points in Iowa. CNN reports:

Ben Carson has knocked Donald Trump from his perch atop the field in Iowa, according to the latest Quinnipiac University poll of Iowa Republicans. Carson has opened up an 8 percentage point lead over Trump with the help of women and white evangelicals, who overwhelmingly favor the soft-spoken former neurosurgeon over the outspoken billionaire. About 28% of likely caucusgoers said they support Carson, 20% back Trump, 13% support Florida Sen. Marco Rubio and 10% are for Texas Sen. Ted Cruz. The survey is the first major poll to find Trump trailing by a significant margin nationally or in the four early states since a CNN national poll taken June 26-28, which showed Trump behind Florida Gov. Jeb Bush 12% to 19%.

Yesterday Carson declared that “God is behind” his presidential campaign.