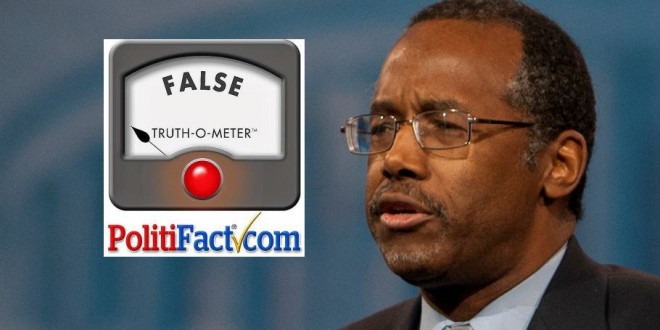 During last night’s GOP debate, Ben Carson got very indignant when the moderator pointed out his long-running relationship with a nutritional supplements company which has paid out millions over deceptive marketing. Carson: “That is total propaganda. And this is what happens in our society — total propaganda. I did a couple speeches for them. I did speeches for other people. They were paid speeches. It is absolutely absurd to say that I had any kind of relationship with them. Do I take the product? Yes. I think it’s a good product.” You’ll be SHOCKED to learn that was a lie. Politifact reports:

Mannatech sells nutritional supplement pills made from larch tree bark and aloe, ingredients with disputed health benefits. The company in 2009 settled the lawsuit, which stemmed from claims that the company was deceptively pitching cures and treatments for illnesses such as cancer and even Down Syndrome. For Carson to say he “didn’t have an involvement with” Mannatech is a stretch. While he was not any sort of employee for the company as far as we can tell, it’s hard to see the speeches he’s delivered, as well as other promotional work, as anything but a full-throated endorsement of the product. Further, Mannatech appears to view Carson as a product promoter. he has appeared in Mannatech-produced videos that appear to be promotional materials. In 2011, he answered questions in an interview with Mannatech’s co-CEO and chief science officer.

In a 2013 Mannatech video, Carson described his experience with nutritional supplements. “The wonderful thing about a company like Mannatech is that they recognize that when God made us, he gave us the right fuel. And that fuel was the right kind of healthy food,” Carson said in the 2013 video. “Basically what the company is doing is trying to find a way to restore natural diet as a medicine or as a mechanism for maintaining health.” Carson also talked about his use of nutritional supplements on PBS in 2014, and Mannatech promoted the interview on its homepage. As far as we can tell, Carson was not a paid employee or official endorser of the product. However, his claim suggests he has no ties to Mannatech whatsoever. In reality, he got paid to deliver speeches to Mannatech and appeared in promotional videos, and he consistently delivered glowing reviews of the nutritional supplements. As a world-renowned surgeon, Carson’s opinion on health issues carries weight, and Mannatech has used Carson’s endorsement to its advantage. We rate Carson’s claim False.