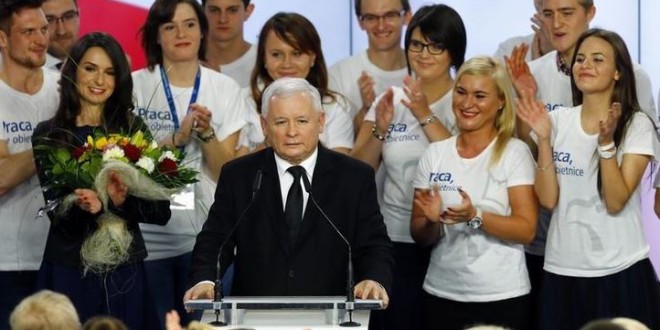 The chance of any advances for LGBT rights in Poland were dashed yesterday as an anti-LGBT right wing party won a commanding number of seats in Parliament. Reuters reports:

Poland’s eurosceptic Law and Justice party (PiS) claimed victory on Sunday in a watershed election that risks putting the ex-communist state on a collision course with key European Union allies. Run by Jaroslaw Kaczynski, the twin brother of Poland’s late president Lech Kaczynski, PiS secured 37.7 percent of the vote, just enough to govern alone and well ahead of the incumbent, staunchly pro-EU Civic Platform (PO) at 23.6 percent, said pollster IPSOS, based on 90 percent of election committees. If the exit poll is correct, the victory for PiS would be the biggest in terms of seats by a single party since Poland held free elections after shedding communism in 1989 – marking a decisive swing to its brand of social conservatism mixed with left-leaning economics in the country of 38 million people.

Poland is already lagging behind most of Western Europe on LGBT rights, providing no recognition of same-sex relationships, banning same-sex marriage and adoption, and refusing to recognise trans people. The party’s victory is likely to mean that there will continue to be no reforms on the issue, due to its hardline opposition and the homophobic views of many members. Party leader Jaroslaw Kaczynski has claimed previously that “the affirmation of homosexuality will lead to the downfall of civilisation” – while officials have also compared homosexuality to “paedophilia, necrophilia and zoophilia”, stating that “this kind of behaviour, just like alcoholism and drug abuse should not be promoted”. In 2013, a Law and Justice MP expressed his support for Uganda’s Anti-Homosexuality Bill, claiming that Ugandans realise they shouldn’t “insult the laws of nature”.

RELATED: Homosexuality was never criminalized in Poland. Gays have anti-discrimination protections in employment and are allowed to serve openly in the military. No partnership recognitions exist in Poland.