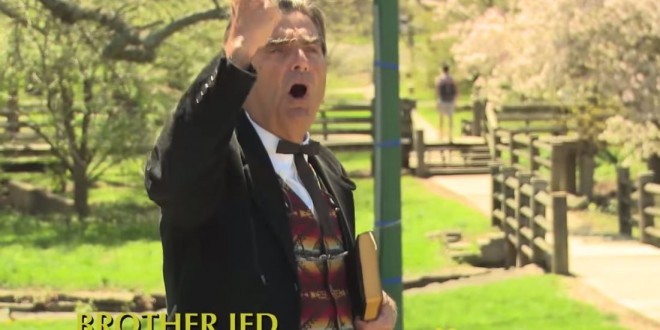 Two years ago, I posted about how nomadic fire-and-brimstone campus preacher Brother Jed Smock would soon be starring with his family in a reality TV show. Like any show, there was only promise of a pilot episode (which is no guarantee of a series or that the pilot would even air on television). But it made sense, I guess. Reality TV and fundamentalist Christians go hand in hand. Between Duck Dynasty, the Duggar family, Teen Exorcists, and Snake Salvation, this couldn’t really be worse, could it? That’s why you’ll all be excited to know the pilot episode of The Book of Jed is now online. In this episode — no joke — “one of Jed’s five daughters brings a boy home from college… it’s a disaster when Jed discovers the boy is secretly an atheist.”

RELATED: Back in August I posted a photo of Brother Jed’s latest sign.