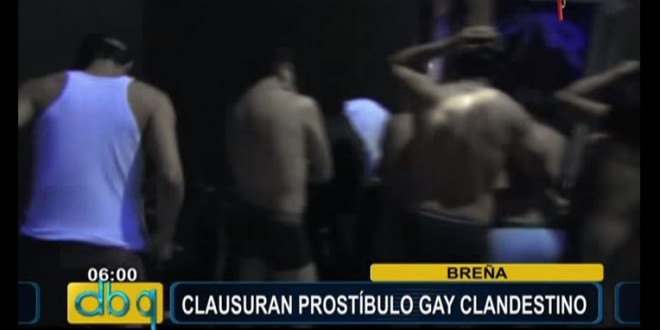 After an investigation lasting several weeks, Peruvian police have raided a gay strip club which they claim was operating as a “clandestine brothel” in which the owners took a cut from go-go boys hired for sex by VIP card-holding patrons. Spanish-language news reports say that Club Casanova, located in the Lima suburb of Brena, held 60 customers at the time of raid, some of whom were allegedly having sex at the time.

The club’s entrance fee was about $4, for which patrons got a beer, two condoms, and a bag for their clothes – which seems more like a sex club than anything else. The raid has earned national headlines and as you’ll see in the clip below, a local television station was clearly tipped off in advance and was allowed to record the patrons hastily putting their clothes back on. One of the owners was then paraded before the camera in handcuffs. It appears that eight others were also detained.