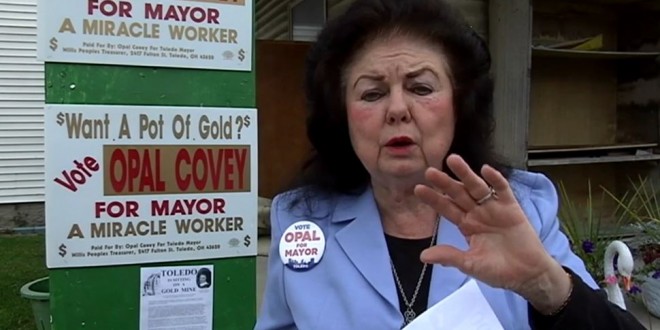 Opal Covey: God Sent Me To Stop The Democrats

Toledo mayoral candidate Opal Covey, who has warned that God will destroy her city if she isn’t elected, has been interviewed by Esquire. Ms. Covey, a Donald Trump fan and exorcist who can cure blindness with her Holy Touch, reveals that she was sent by the Lord Almighty Himself to stop the Democrats:

“I perform miracles through the holy spirit,” Covey told Esquire.com in a phone interview this morning. She claims to have given a blind woman sight. She says she’s healed deformed limbs. Covey speaks fondly of the exorcisms she has conducted, casting out 30 demons. She can speak in tongues. “I have traveled, and everywhere I go people are helped because they know I am a woman of God. Everything I tell them comes to pass,” Covey said. In 1977, God sent her to Toledo, Ohio. “God sent me here to bring the citizens out of slavery from the Democrats, they’ve been in power for 48 years,” she said, the sound of cats meowing through her south Toledo house. “I came here to bring them out like Moses brought the slaves out from under this horrible Democrat government that we have in Toledo.”

The above-linked interview closes with this quote: “Speaking in tongues–it’s god speaking but you cannot understand what he’s saying. You have to yield yourself to that … cowya kasha baki … there was one right there.” (Tipped by JMG reader Brian)