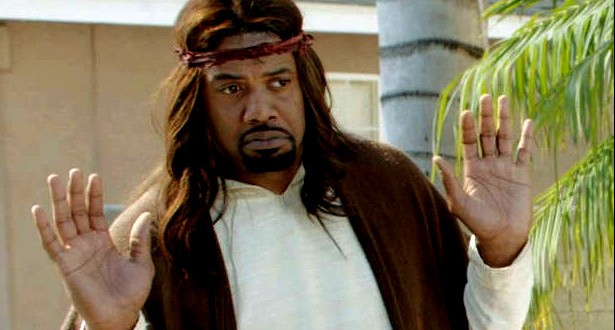 Ooh, Monica Cole is ever so pissed:

Dear Joe, Yes, “Black Jesus” is back. The sacrilegious program “Black Jesus” has returned for a second season after an entire year. The late night programming on the Cartoon Network, known as Adult Swim, has decided to continue airing the non-animated show “Black Jesus” portraying Jesus as a “black guy living in the hood.” The show makes a mockery of our Lord. The foul language used, including using the Lord’s name in vain, is disgusting. In addition, there is violence, gunfire, drugs, and other inappropriate gestures which completely misrepresent Jesus. This is blasphemy!

“Black Jesus” is airing on Friday evenings at 11:00 pm ET/ 10:00 pm CT with a MA-L rating. Adult Swim plans to blaspheme Jesus on a weekly basis. This mockery will be similar to “South Park” and “Family Guy,” but much worse since the entire program will be based on lies about Christianity. 1MM will defend our Savior because He is Holy! Adult Swim is obviously not a family network, and this program is set to air later in the evening when children should be asleep, but that is no excuse. Adult Swim has crossed the line by belittling the Christian religion with foul jokes.

We need to send a loud and clear message to Adult Swim, its owner Turner Broadcasting System, Inc. (a Time Warner Company), and all potential advertisers of “Black Jesus” that this kind of programming is insulting and completely unacceptable. Adult Swim is not ridiculing any other religion currently and wouldn’t dream of mocking Mohammed or Muslims. “Black Jesus” is another attempt to distort the truth about Christianity. There is power in numbers! Please share this with everyone you know.

TAKE ACTION: Contact the company who sponsored the anti-Christian “Black Jesus.” Prestone (Fram Group) was the major advertiser who paid corporate dollars to promote their products in association with the content of the program. Let Prestone know that their advertising dollars are supporting bigotry and animosity toward people of faith.