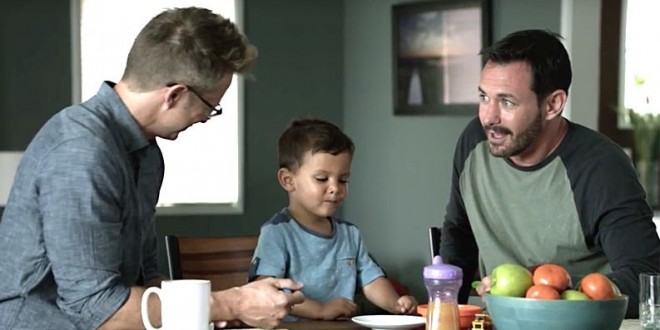 You’ve been waiting for this one, right?

“Dear Joe, A homosexual ‘married’ couple is featured prominently with a young boy (their son) in the new Campbell’s Soup advertisement. Campbell’s #RealRealLife campaign aims to change the face of the American family. It starts off with the first man feeding soup to the little boy and in a ‘Star Wars’ Darth Vader voice says, ‘Luke, I am your father.’ Then the other man enters the scene and says, ‘No, Luke, I am your father.’ How confusing for this little boy and for all children viewing this commercial. Obviously, Campbell’s is sending the message that homosexual men are raising children, whom they wouldn’t have if a woman wasn’t involved, and they are ok with it.

“Campbell’s Soup is glorifying this unnatural marriage. One Million Moms believes family is based on love, but this does not justify normalizing sin. 1MM does not agree with the need for Campbell’s to support same sex marriages or couples. Companies should advertise the quality of their products. It is no longer about the product but about their cause. They should not be highlighting who is attracted to whom or who sleeps with whom. This is a marketing decision Campbell’s will regret. This gay-inclusive commercial is attempting to desensitize viewers. There is concern about the way this ad is pushing the LGBT agenda, but an even greater concern is the way that they are attempting to redefine “family” and “real marriage.”

“TAKE ACTION: Please contact Campbell’s Soup through our website urging them to pull this inappropriate commercial immediately and remain neutral in the culture war. Also, let Campbell’s Soup know that continuing to air this ad and other offensive advertisements in the future will force your family to make the decision to no longer purchase any of Campbell’s Soup Company brands such as Pepperidge Farm, Pace, Spaghetti O’s, V8, Swanson, and Prego.”