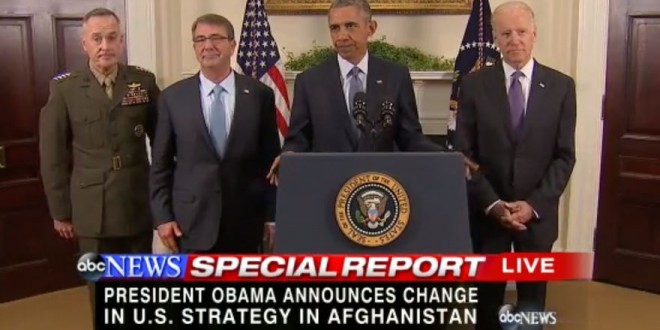 President Barack Obama announced Thursday that U.S. forces will remain in Afghanistan at their current levels throughout much of 2016, yet another delay in their scheduled withdrawal and an acknowledgment that America’s longest war won’t be concluded on his watch. Obama campaigned as the president who would end two wars, and Thursday’s decision was a major political reversal that jeopardizes a cornerstone of his legacy. Taliban gains in Afghanistan and appeals from Kabul for ongoing U.S. assistance contributed to postponing the troop withdrawal and underscored Obama’s continuing difficulty in fulfilling his intention to remove all American forces by the time he leaves office.

On Thursday, however, he told reporters at the White House that he wasn’t disappointed at having to make the announcement that plans for the withdrawal had been put on hold. Instead, he said, his job was to make necessary adjustments given events on the ground. He also stressed that the formal combat mission there has ended, and that he is a president who does “not support the idea of endless war.” He ended the Iraq war and removed American troops there in 2011. The plan announced Thursday keeps 9,800 U.S. troops in Afghanistan before an anticipated drawdown to around 5,500 by the time Obama leaves office.