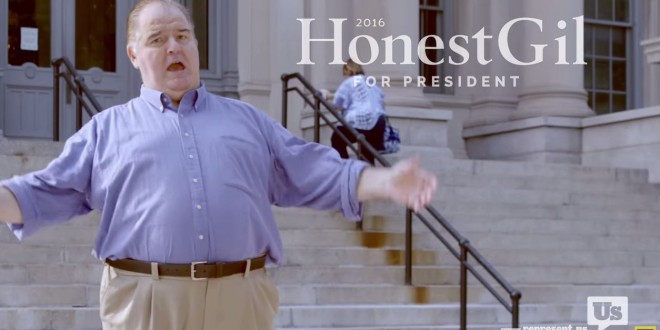 “Honest Gil” Fulbright’s presidential campaign is literally a joke, but that didn’t stop him from beating Jeb Bush and Lindsey Graham in a New Hampshire straw poll over the weekend. Played by actor Frank Ridley, Fulbright is a mock-candidate who skewers typical politicians for Represent.us, a nonpartisan group that is pushing for campaign finance reform. He’s not even on the ballot anywhere. But after he gave a stump speech cracking jokes about Republican candidates at the libertarian Republican Liberty Caucus’s national convention in Nashua, Fulbright beat some of them in the straw poll. “Face it, I am a puppet for special interests and lobbyists,” Fulbright said. “And I will break any campaign promises that rub my donors the wrong way.” Fulbright picked up a dozen votes, putting him way behind Kentucky Sen. Rand Paul, who won with 445 votes, according to the New Hampshire Union Leader. But that was still ahead of former Florida Gov. Jeb Bush, South Carolina Sen. Lindsey Graham and former New York Gov. George Pataki.